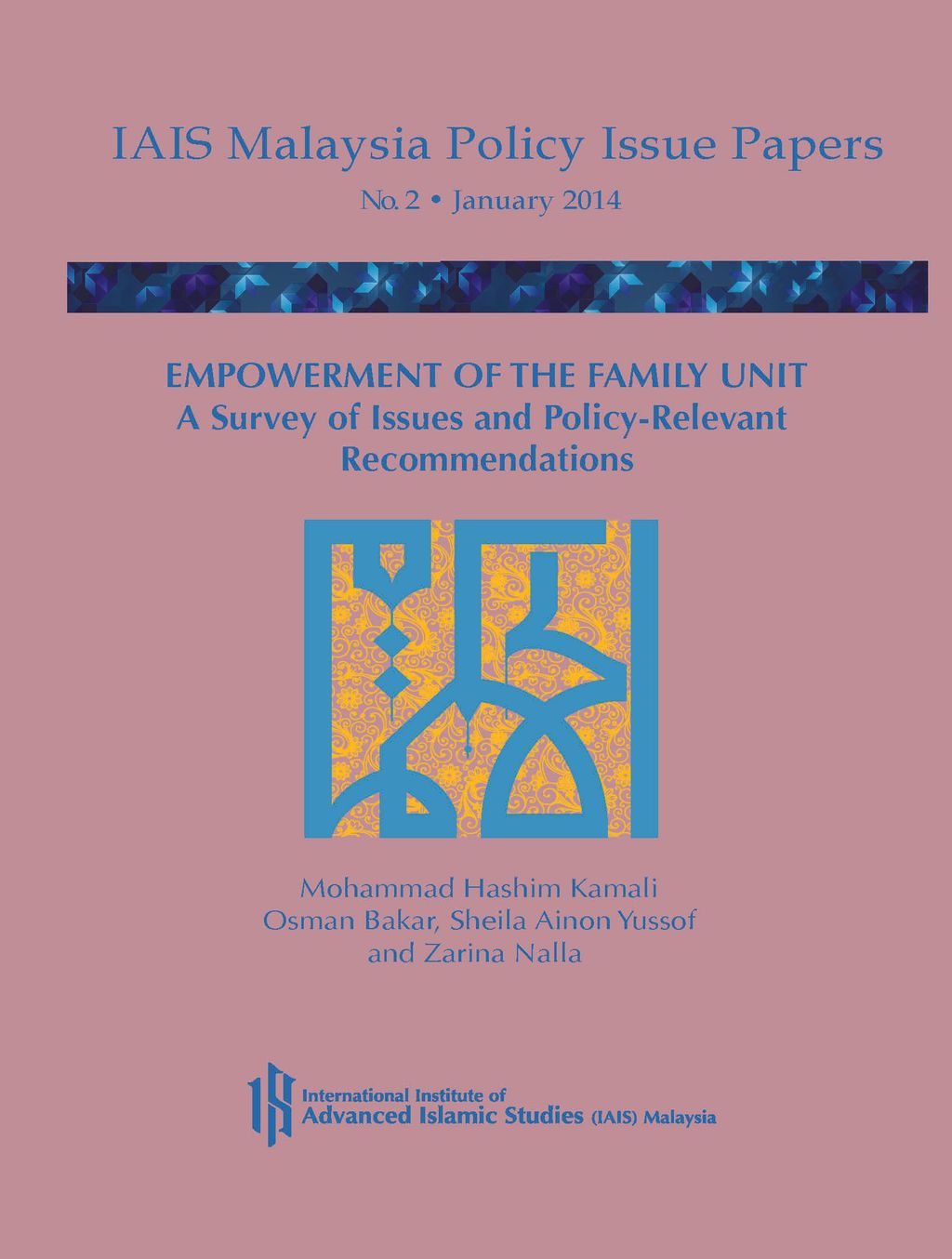 PIP 2: Empowerment of the Family Unit: A Survey of Issues and Policy-Relevant Recommendations

The Universal Declaration of Human Rights 1948 defines “family” as a “natural and fundamental group of society”. It is regarded as the “core of life, cradle of the future and pillar of happiness”. Parents provide the necessities of life for their offspring; they are their children’s first teachers as they provide role models for the children’s personal growth. Parents teach values and appropriate social skills to their children, and the extended family maintains continuity of those values and a sense of belonging to a larger group.  It is the family also that establishes a concrete foundation for partnering spouses. Family also cares for older persons, the sick and the disabled; it builds bridges with the community, its prevailing ethics and culture. A Muslim family also bears certain obligations toward early education of the children including religious education in the basic tenets of Islam.

Family and its role in socio-economic development are given high priority by international and regional communities as evidenced by the Action Programme of the International Conference on Population and Development (ICPD); the Copenhagen Declaration and Action Programme, the Beijing Action Platform, 21 Programme, the Rio Declaration on Environment and Development, as well as the World Summit on Children, to name but a few. Three of the eight Millennium Development Goals (MDGs) of the United Nations are based on the family and its welfare. Of note is also the “2013 Global Summit of Women” held in Kuala Lumpur in June 2013.

The socio-economic development of Malaysia has advanced at such a pace that it has caused an avalanche of challenges to the family institution. The weakening of family ties and values of the traditional extended family in Malaysia made this “cradle of stability” a subject of discourse especially over the challenges the government has faced with the formulation of a national policy agenda for the country. Challenges facing the family are naturally not the same in different countries and societies, yet many of the problems highlighted in this paper show commonalities that can provide a good basis for formulation of common strategies to address them.

Indicators of deterioration of the family institution and erosion of its values are too many to be listed. But worthy of note is the rise in the number of dysfunctional families due to progressive alienation from traditional values. The traditional role of the family institution, to put it briefly, is to help produce both the good person and the good citizen through proper home upbringing and education. The pillars of the traditional family are the father and mother, who in their parenting roles often receive invaluable external support from extended family members. Social relationships in the past were based not only on nuclear but also the extended family bonds, as well as those in the neighbourhood and interpersonal ones. Family and community used to play a central role in the lives of its members, whereas today the government, NGOs and the corporate sector have gradually taken over some of the traditional family roles. Unfortunately, for numerous reasons, many of which are now common knowledge, the traditional family institution has progressively become weakened and the family values sustaining it eroded.

This social phenomenon of deteriorating family values and institution is now a cause for national concern as its negative impact is being increasingly felt in many sectors of societal life. What is also worrying is the likelihood that with more social ills and problems afflicting society along with mounting economic pressures, there will be increased numbers of dysfunctional families and attachment to family values may be insufficiently strong to enable the average family to withstand external pressures.